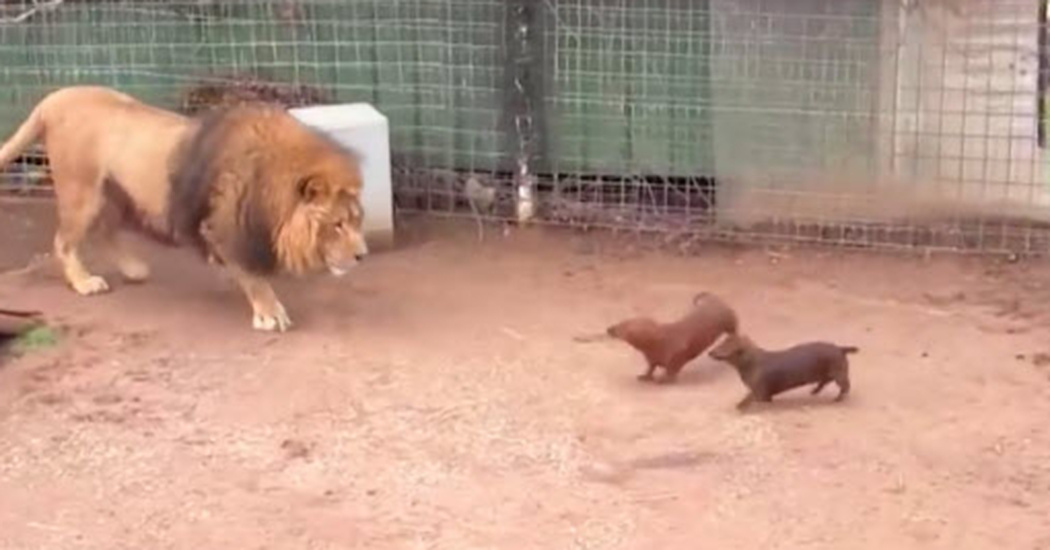 What is the first thing that comes to your mind when you think of a lion? Many people think about the king of the jungle and one of the largest, most aggressive cats out there. Most of us would probably agree that we wouldn’t want to come up against a lion in the wild because we would be outnumbered, even if it was one on one. The fact is, lions can be vicious and they do pray on humans sometimes. Then again, there are some people who just seem to be at home around lions and it seems as if they are perfectly safe doing so.
Of course, lions do more than make us shrink back in fear with their roar and aggressive personalities, they also have the ability to make our hearts melt. When we see humans having interactions with wild animals such as these, it can really make us love these wild creatures even more. In the video below, you will have the opportunity to see a rather unique interaction among animals and it is not only going to make you feel warm and fuzzy on the inside, it is going to give you a good laugh as well.

This entire scenario plays out at the Wildlife Park in Oklahoma. It involves a lion that has been at the park since he was a young cub. It also involves a rather unexpected companion, Abby, a dachshund dog. The lion that has been at the park for years understands the raw power that is behind the paws he has. He probably also realizes that he is a large size, especially compared to the small size of the dachshund. Then again, we’re pretty sure that Abby is also familiar with all of this as well. 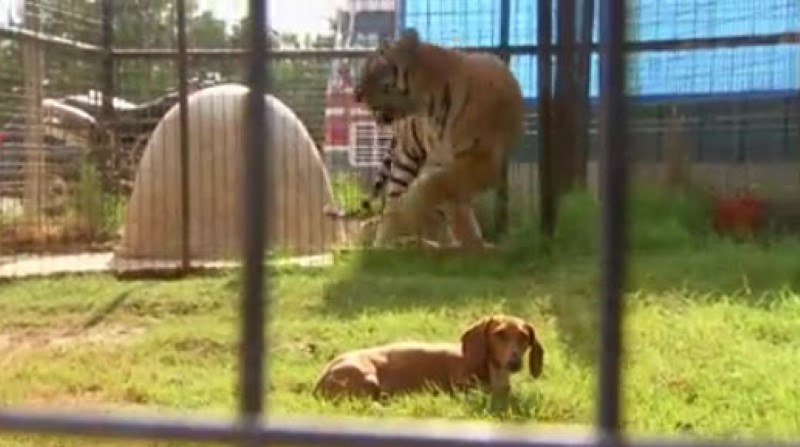 This is Abby. She has called the Wildlife Park in Oklahoma home for a number of years. She just seems to be comfortable around the park and it doesn’t even seem to faze her that there is an enormous tiger standing behind her cage! Of course, the tiger might not be all that friendly but Abby is perfectly happy to lay in the grass and enjoy all that life at the wildlife Park has to offer. 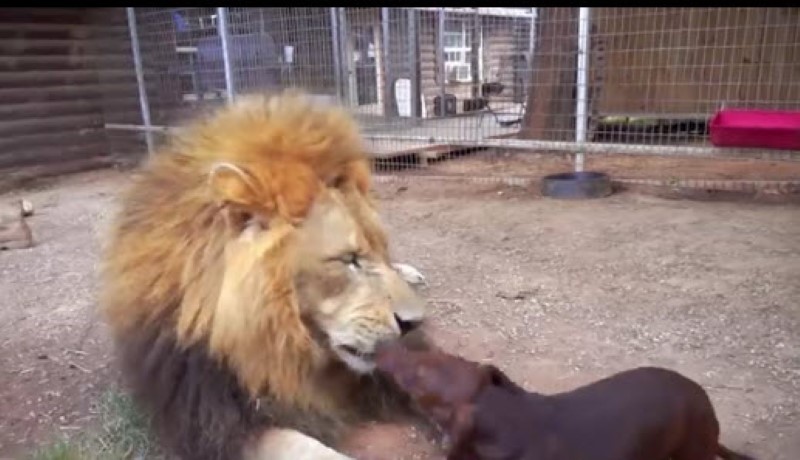 Now I would like to introduce you to the lion in the story. His name is Bonedigger and he has also been at the Wildlife Park for a number of years. In fact, he was brought to the park when he was only a young cub and it was during that time that these two unusual friends got acquainted with each other. It is thought that they may have bonded during that time, and since then, they have been best friends. They are inseparable from each other. 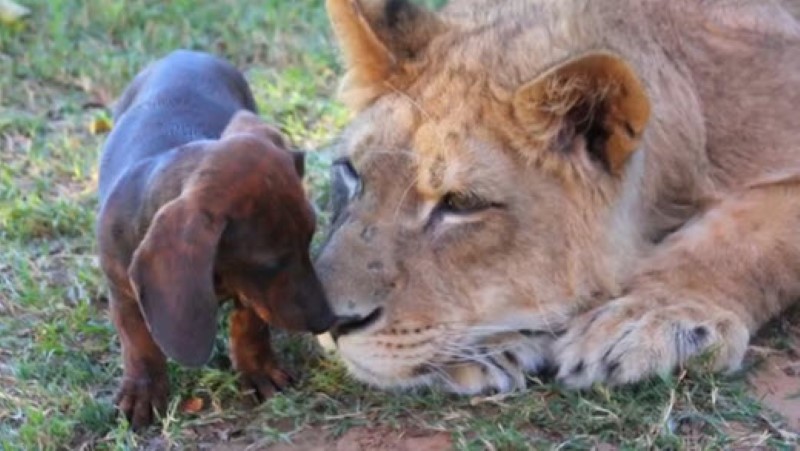 This is a good picture of Abby and Bonedigger playing together. The lion is very young in this picture but even at this age, he still is much larger than Abby. As you can tell, Abby seems to be perfectly comfortable with her feline friend and the two of them are already bonding. If you have any friends from when you were a very young child, you recognize that they are some of the most faithful, loyal and confidential friends that you have in your life. You are probably still holding on to some of those friends and you may do so forever. 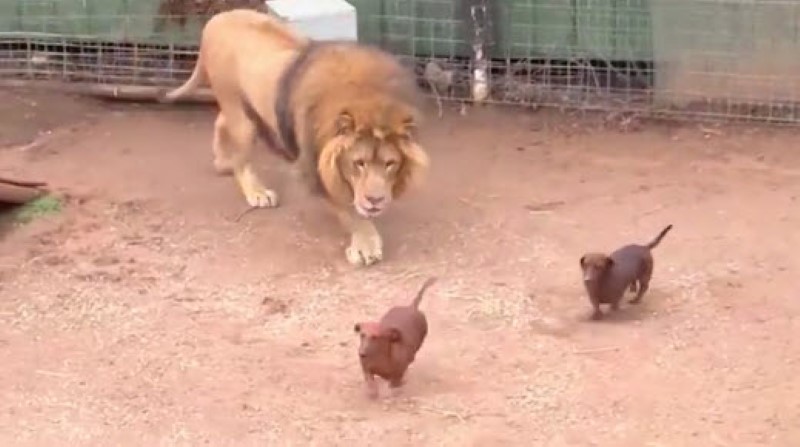 What happens when the two of you grow up and you don’t quite grow up the same? Sometimes you actually grow apart from each other but at other times, the friendship only grows stronger. That was the case with the dog and Bonedigger. Even though they didn’t quite grow up the same, they still enjoy chasing each other around the cage. Sometimes, Abby is the aggressor and Bonedigger will actually stand aside and let her take the lead. Before you know it, however, the roles have reversed and they will be chasing each other with Abby out in front. 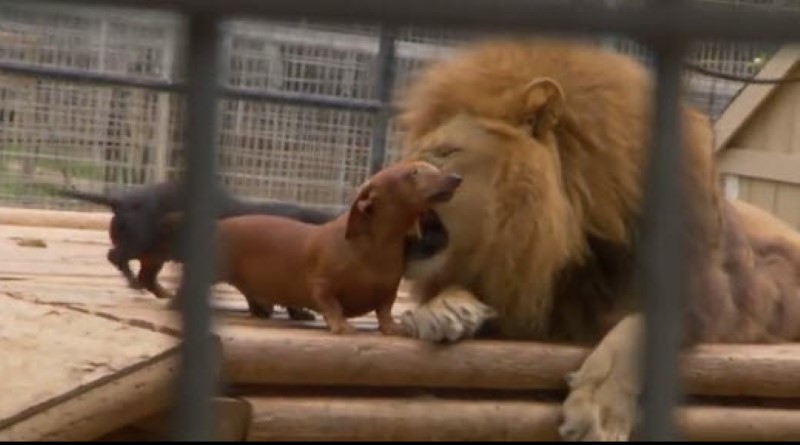 If there is one thing that we know for certain, it’s the fact that these two wonderful creatures continue to share a life that is absolutely perfect together. It just goes to show you, you can sometimes take the wild out of a wild animal just as easy as you can add the wild into a tame one. We hope these two have many more happy years together.

This just proves that animals are just big fluffy bags of love.